Baby . . . honey . . . mama . . . papa . . . darlin’ . . . the colloquialisms that slip off the tongue so easily in our small Southern town now take on new meaning for me after Hurricane Matthew. Words that were once used in conversation to express hospitality and affection now reach deeper into the soul. In Lumberton, located in Robeson County, North Carolina, Southern slang mixes with cultural expressions from the local Native American (“Lumbee”) community and beyond to become its own special dialect. Visitors from “up North” seem taken aback by the language, often misinterpreting the greetings as disrespectful. We sometimes must explain to an irate customer that our cashier was not hitting on her husband by calling him “baby” or “darlin’”; around here her words are the epitome of graciousness and respect.

Matthew’s floodwaters are finally now receding after catching us by surprise, and   government and volunteer agencies mobilized appropriately. This past week the sprint continued – – – trying to meet the most urgent needs of shelter, food, water, and public health. Locally, we are now entering the marathon, assessing long-term needs and seeking to match resources (physical and financial) with need. 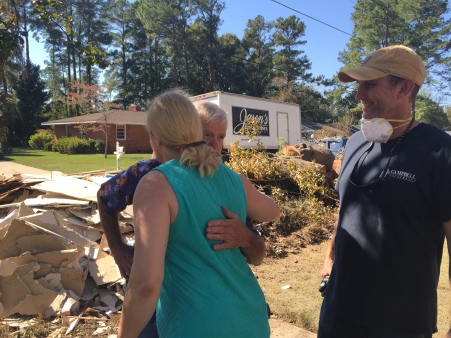 Last week, my church family was busy throughout our area, helping “mud out” and remove salvageable belongings from damaged homes, delivering meals to those who need them, receiving and distributing donations, providing classrooms for a Mennonite Disaster Relief Team, and hosting social workers from the Department of Social Services as they reprocessed those currently receiving food stamps so that they could receive additional help following the widespread flooding after Matthew pillaged our area. Throughout the week, an estimated 4000+ families came through the doors of our activity building, which had a huge oak tree on one corner of the roof, looking for whatever help they could find. 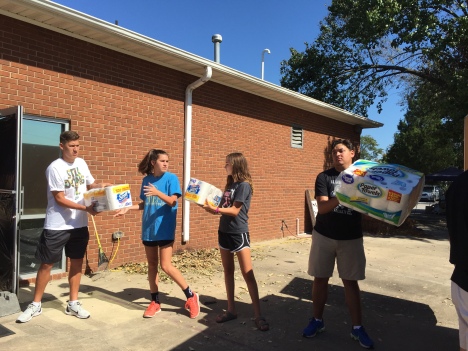 Donations of bottled water, canned foods, diapers, wipes, formula, and hygiene products were unloaded at our back door and distributed at our front door almost as quickly as they were received. Many, many volunteers – – – church members and non – – – worked tirelessly wherever they were needed. In many cases, it was hard to distinguish the helpers from those being served; we all were dealing at different levels with no running water, damaged property, interrupted businesses, etc., and despite best efforts, our countenances portrayed the fatigue. 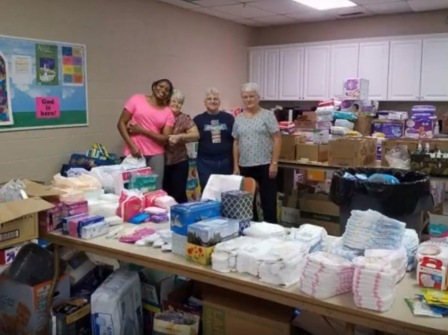 On Monday, my assignment was to greet and direct those in line outside, as only a few people at a time could enter the building. Fear and desperation was a common feature on the faces of those waiting. Black, white, Lumbee, and Hispanic stood in line together, suddenly united by disaster and need. These were folks for whom life had already dealt a hard blow; many had lost jobs over the years as industry and business retreated from our formerly vibrant, rural community. Many who stood in line did not qualify for the help DSS offered. They were the working poor – – – ineligible for government assistance but barely making ends meet before the storm. Alarm was evident in their eyes as they learned they could not apply for assistance. Then, dismay turned into a small bit relief, as a fellow volunteer and I explained that we had supplies for them. Some wanted to talk and share their stories; others did not. But they each quietly asked about help available and I was able to ask about their individual need.

“How is your family?”

“Did you experience much damage where you live?”

Almost every time, a weary face looked back at me, described frightening experiences of escaping swift, dark floodwaters with nothing but their families and the clothes on their backs. Repeatedly, they expressed grief over homes and vehicles underwater, their appreciation for and the difficulty of living in shelters, or the challenge of squeezing twelve extra bodies into a home built for four, with limited resources and without running water.

And then it came.

“But Baby, I’m doin’ better than most,” they would say, citing another’s situation they perceived as more tragic. Their conversation then turned to me, and they would ask about my family, my home, my safety.

Their words poured over me like fresh water, quenching the need for comfort that we shared. Those being comforted became the comforters. I didn’t mind being called baby, or sweetheart, or even mama by these sweet strangers who were not only concerned for themselves but had compassion for others. They slowly passed by me and went into the building, appreciative of the supplies that others had donated for them. They only took what was essential, leaving items for others they knew needed them more.

I’m seeing this strength of community everywhere these days. Locals who before might pass one another by are taking time to stop and check on one another. Strangers are embrace and encourage one another as they share their stories. When I went to the grocery store to purchase supplies (yes, some stores are open and receiving shipments, but those who had trouble affording necessities before the storm really cannot afford them now), I parked across from a car full of people of a different race than mine. Our glances caught when we got out of our cars, we shared sad smiles, and they asked if my family and I were doing okay. The woman hugged me as we walked into the store. I don’t know who they were, but it really doesn’t matter. It was another reminder that we are a community who cares about our neighbors.

Our county has received much bad press in the past, some well-earned and some not. I have told people over the years of the strength and pride that exists here and crosses racial barriers. It has never been better illustrated than in the past week. I’m sure there will continue to be small pockets of dissension and misbehavior among some, but I have not observed that this week. Instead I have seen glimpses of hope. What I have experienced is evidence that we are better together than apart, and that the true spirit of Lumberton and Robeson County residents is now being witnessed by fellow North Carolinians and our country.

And that, Baby, is a blessing.

A Writer Without Words